Who was Edith Stein?

Saint Edith Stein was born on October 12, 1891. She was part of a large devout Jewish family. Edith Stein’s Journey is nothing  short of remarkable. When Edith was a teenager, she became an atheist. She went on to college and became a professor and teacher of philosophy. She achieved remarkable success in her field.

A turning point in her life is when she picked up a book about St. Teresa of Avila. Edith was always searching for “truth” and she found it in the Roman Catholic Church. Edith was baptized at 30 years old in the Cathedral Church in Cologne, Germany. At 42, she took the name Sister Teresa Benedicta the Cross. Eventually, she was moved to Holland for safety during World War II; however, she was captured and sent to the gas chambers of Auschwitz when she was 51 years old.

In her essays on the spirituality and education, Edith Stein suggests ways in which positive attributes could be fostered through education in particular:

Before Edith Stein was taken away to Auschwitz she left behind these words for her Mother Superior “Ave Crux, Spec Unica” which translates to “Hail Cross, Our Only Hope.”  Pope John Paul II beatified Teresa Benedicta in 1987 and canonized her in 1998.

“Because she was Jewish, Edith Stein was taken with her sister Rosa and many other Catholics and Jews from the Netherlands to the concentration camp in Auschwitz, where she died with them in the gas chambers. Today we remember them all with deep respect. A few days before her deportation, the woman religious had dismissed the question about a possible rescue: ‘Do not do it! Why should I be spared? Is it not right that I should gain no advantage from my Baptism? If I cannot share the lot of my brothers and sisters, my life, in a certain sense, is destroyed.”

Addressing himself to the young people gathered for the canonization, the pope said: “Your life is not an endless series of open doors! Listen to your heart! Do not stay on the surface but go to the heart of things! And when the time is right, have the courage to decide! The Lord is waiting for you to put your freedom in his good hands.”

Edith Stein is an example for all who are engaged in education be that students, staff or governors. 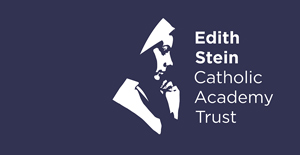